Hampshire Returns to England from Jamaica in 1696 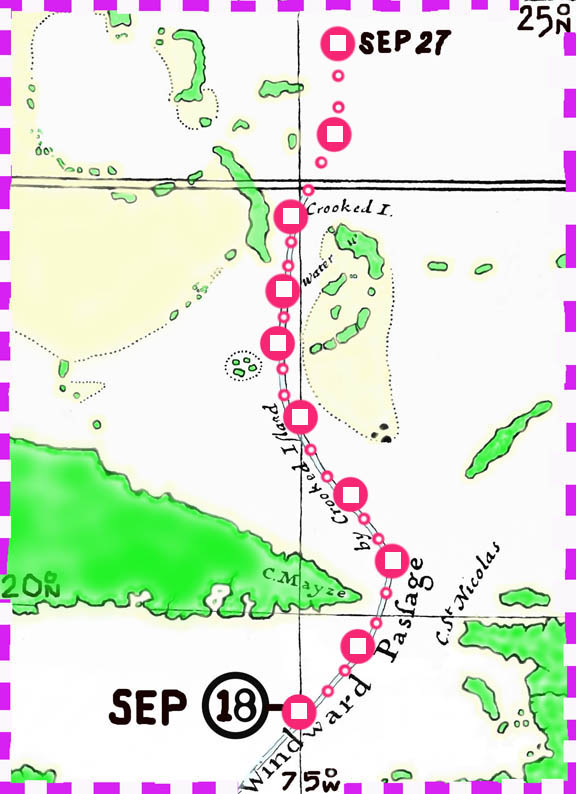 Based on Herman Moll's 1720 mapping of the West Indies. Source: https://de.m.wikipedia.org/wiki/Datei:1732_Herman_Moll_Map_of_the_West_Indies,_Florida,_Mexico,_and_the_Caribbean_-_Geographicus_-_WestIndies-moll-1720.jpg

At the Harbour of Port Royall, Jamaica -- July 27th, 1696 Capt. John Fletcher records in his log "This day recd ordrs from ye Lords of The Admty to make the best of our way for England --"

After nine weeks to prepare, repair and collect victuals  for the voyage and a final counter clockwise sweep of the Jamaican shoreline in search of French privateers, the Hampshire heads for the  beginning of the Western Passage between the islands of Cuba and Hispaniola, She arrives there on September 18th. 1696

The Hampshire sails  a northeast course along the Windward Passage  headed for Crooked Island  on the first leg of their return to England. Fletcher knew that two days north of  Crooked Island they would be in the  Antilles  Current.

However, the weather was not fully cooperating with them,  On the first day he records “hazey weather and Lite Windes and in the evening fresh gales…”

The next day Sept. 19th  things did not improve as the ship faced “…a very hard "Turnada" continued for ye space of an hour”. The weather persisted and two days later “had a very hard "Turnada" , had to lay by an night”, and again on Sept. 22 “a very strong "Turnada"  so lay by”. They finally arrived at Crooked Island Sept. 25 to “get water onboard”.

Underway the next day they experienced “variable winds”, followed by two more days of  “small gales”. On Sept. 27, after a grueling nine day transit of the Windward Passage Hampshire  started to ride the Antilles Current northwest toward the Florida Straits and the Gulf Stream.


Continues with -- 1696 Hampshire crosses the Atlantic
Proudly powered by Weebly